Liberals present plan to phase out coal-powered electricity by 2030

The federal government is speeding up the plan to phase out coal-fired electricity by 2030 as part of its comprehensive plan to make Canada a leader in green energy.

But Nova Scotia has received an exemption to continue its use beyond that deadline under a so-called “equivalency agreement.”

In announcing the plan today, federal Environment Minister Catherine McKenna said about 80 per cent of Canada’s electricity currently comes from clean sources such as hydroelectric power, nuclear, wind and solar. The goal is to make 90 per cent of electric power generation free of greenhouse gas emissions by 2030.

“This will help build a more sustainable future, and it is also a great economic opportunity,” she said during a news conference in Ottawa.

The plan accelerates the current timetable for the four provinces that still burn coal for electricity — Alberta, Saskatchewan, Nova Scotia and New Brunswick — to either capture carbon emissions, adopt technology or shut down the plants.

McKenna said the plan will reduce greenhouse gas emissions by five megatonnes a year, the equivalent of getting 1.3 million cars off the road, but she provided few details on how the accelerated phase-out will be achieved.

Reducing pollution from coal will also reduce smog-related illnesses, such as asthma, that affect children and seniors, McKenna said.

“The early phase-out will significantly improve the quality of our air and the health of Canadians,” she said.

The announcement comes in advance of a first ministers meeting with the provinces in early December to hammer out a broader climate-change plan.

McKenna said the plan will be flexible to allow each province to craft its own solutions.

According to McKenna’s office, the plan will:

This afternoon McKenna joined Nova Scotia Premier Stephen McNeil to announce the province will phase in a cap-and-trade system to reduce greenhouse gas emissions. Under an “equivalency agreement,” Nova Scotia will have more time to phase out coal-fired electricity.

McNeil said the extension, which does not set a specific time frame, recognizes the province’s past efforts to find alternatives to coal-fired electricity and propel new projects such as hydroelectricity and wind power.

“This agreement allows us to use that time wisely to get us to a point where we can get off coal while at the same time not putting a sticker shock on power bills in this province,” he said.

McKenna said the agreement also recognizes that this is “a period of transition” to position Canada as a leader in green energy.

“We recognize you have to be smart about this; that you have to find solutions that ensure people still have jobs, that we need to position for the future,” she said.

Last month, Nova Scotia Environment Minister Margaret Miller walked out early from a national meeting on carbon pricing in Montreal, just hours after Prime Minister Justin Trudeau issued an ultimatum to provinces to adopt carbon pricing, or have it imposed, by 2018.

Miller and colleagues from Saskatchewan and Newfoundland and Labrador left the meeting with McKenna before a planned photo opportunity and news conference.

Although Nova Scotia appears to have worked out its differences with the federal government, an angry Saskatchewan Premier Brad Wall said today’s announcement marks the second time Ottawa has made a major policy announcement in advance of next month’s climate change meeting.

He said that violates the spirit of a promised partnership approach.

“These actions have severely undermined the December meeting and have exposed the prime minister’s disingenuous commitment to federal-provincial collaboration,” Wall said in a statement. 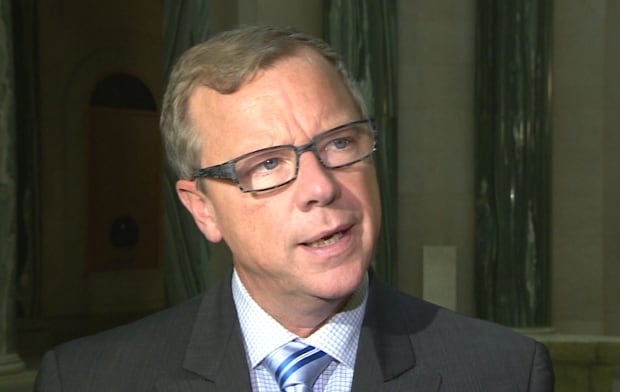 Saskatchewan Premier Brad Wall is upset the federal government announced a plan to phase out coal-powered electricity by 2030 before a first ministers’ meeting on climate change next month. (Adam Hunter/CBC)

Alberta Environment Minister Shannon Phillips said Saskatchewan’s monopoly is much different from her province’s deregulated electricity market. She said Alberta is well ahead of other jurisdictions in phasing out coal, which costs the province $300 million a year in related health-care costs.

“We don’t expect this will change much for us because we’ve already set the parameters of our policy,” she said.

McKenna’s coal phase-out announcement came just two hours before a group of 15 health and environmental groups were scheduled to hold a news conference on a report called Out with the Coal, In with the New that outlines the benefits of an accelerated phase-out of coal-fired power.

Its analysis says the 2030 phase-out will more than double the benefits compared with the existing 2012 federal regulation. The report — a joint effort from groups including the Pembina Institute, David Suzuki Foundation and Canadian Public Health Association — says the acceleration will avoid 1,008 premature deaths, 871 emergency room visits, and other health-care and lower-productivity costs pegged at nearly $5 billion between 2015 and 2035.

Erin Flanagan, federal policy director for the Pembina Institute, welcomed the federal announcement but said it must be accompanied by a regulatory framework and a schedule of targets to measure progress.

“The transition to clean energy and away from fossil fuels is a clear requirement for long-term climate success,” she said.

Ian Culbert, executive director of the Canadian Public Health Association, said “coal kills,” and questioned why any province would resist a policy change that would reduce health-care costs.

There are now 34 coal plants in operation, according to the report. Another is located in Brandon, Man., but is designated by law as an emergency plant and is not in regular use.

While coal-fired power generation in Canada was reduced by half between 2000 and 2014, coal is still burned to generate 11 per cent of Canada’s electricity. It remains the primary source of electricity in Alberta, Saskatchewan, and Nova Scotia.

Canada has maintained steady coal production in recent years, largely through exports, but a decrease in demand from countries such as China has halted production in some Canadian coal mines.

Canada’s own consumption of coal has decreased dramatically over the past decade.