Trapping carbon works, but high cost will limit its use to essential processes: Don Pittis

As business leaders back carbon pricing, sequestration, though flawed and costly, will have its uses 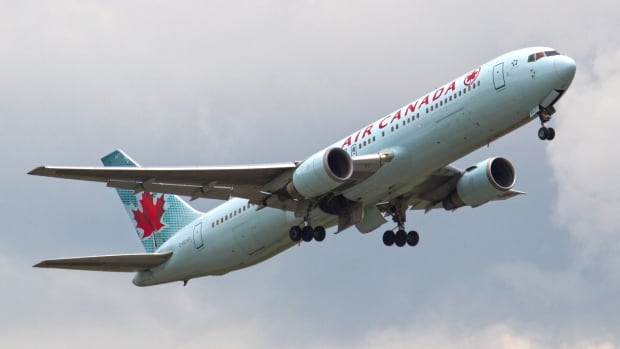 Feeling guilty about all that carbon you produced to fly to the climate conference or maybe on your winter holiday? A whole business has grown up to help wash that guilt away by planting trees as a carbon offset.

The debate over whether it is possible to take carbon out of the atmosphere is now pretty well over. It can be done.

But whether storing that carbon in biological systems such as forests or putting it deep underground, the dream of solving our climate change problem with carbon sequestration is hopelessly flawed.

A rising price for carbon will help. But even as a group of top business leaders throw their support behind carbon taxes, the cost of carbon capture technology means it will be limited to a small range of uses.

But within that range of uses — the places where producing carbon is a necessary part of a necessary process — carbon capture will be an essential tool.

Besides its high cost, the appealing idea of trees sipping up the carbon in holiday jet fuel has its own special problem — it doesn’t last.

With delicate instruments installed in British Columbia forests, Black and his team can precisely measure the amount of carbon dioxide that an organic system produces and absorbs. 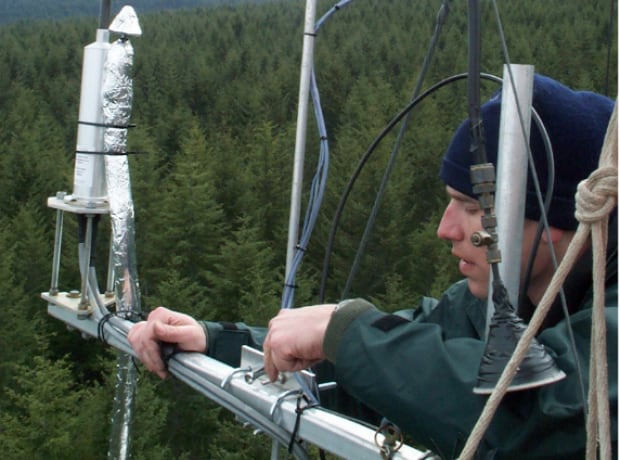 An experimenter above the tree tops installs devices for measuring how much carbon dioxide is being absorbed out of the air by a Canadian forest. (University of British Columbia)

Black is a passionate advocate for sequestering carbon in old growth forests, partly because he says it stays there for the long term. But he knows that in most cases, carbon trapped in organic systems gets back into the atmosphere within as little as a hundred years.

But whether in biological systems or in underground geological storage, the biggest barrier to carbon sequestration is simply the huge volume of carbon humans release by burning fossil fuels, estimated at 36 billion tonnes in 2016.

There aren’t enough old growth forests to make a dent in a number like that.

The tens of thousands of megatonnes of carbon we’ve released over the last mere century or so had been sucked up over millions of years and sequestered over geological time.

Researchers in Alberta and Saskatchewan have been finding ways to put the carbon dioxide back underground, injecting it into exhausted oil formations or dissolving the gas in deep saline aquifers.

“I think it is fair to say that from a technical point of view [carbon capture] has been proven,” says Rick Chalaturnyk an expert on the geological storage of greenhouse gases at the University of Alberta.

While in some cases CO2 has managed to escape back into the atmosphere, scientists have largely learned what works and what doesn’t.

The problem, says Chalaturnyk, is that it’s just not economically viable. He estimates carbon taxes would have to rise to between $50 and $100 a tonne to change that. 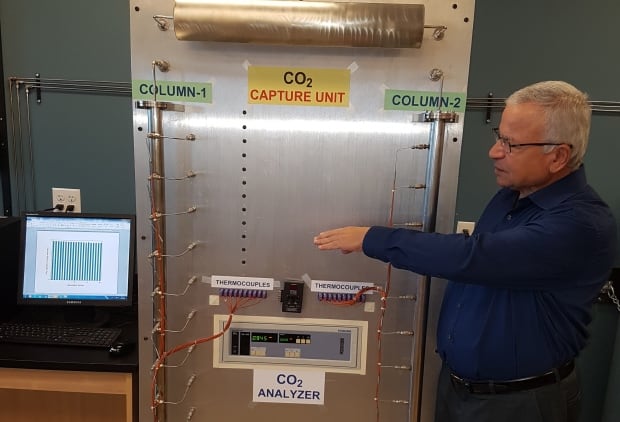 Abdel Sayari demonstrates his device for capturing carbon dioxide by getting the gas to stick to molecules on a solid surface, and then releasing it again, with a big energy advantage over other methods. (University of Ottawa)

Scientists around the world including Abdel Sayari from the University of Ottawa are working to try to bring those costs down.

Sayari, who will be presenting his technique in Edmonton this week at the InnoTech Alberta Distinguished Lecture, uses what he calls “temperature swing adsorption,” to capture carbon dioxide as it reacts on the surface of a solid substance something like an air filter.

“It reacts at a low temperature and releases at a slightly higher temperature,” he says, making it much more efficient than previous techniques that trapped the CO2 in water, requiring the energy to heat all that water as well.

Duncan Kenyon, resident expert on carbon capture and storage at the pro-environment Pembina Institute, says carbon capture technology will be “essential and significant in de-carbonizing our world.” 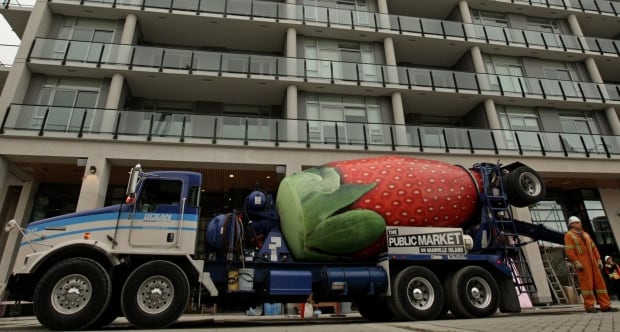 One of the three biggest producers of carbon dioxide is the cement industry, which makes an essential product using huge amounts fossil fuel to cook limestone into lime. (Darryl Dyck/The Canadian Press)

He is thrilled by recent leaps in the technology. But he disdains what he calls politically motivated spending on carbon capture as an excuse to keep on burning coal. He calls that spending a “boondoggle.”

Although rising carbon prices will make wind and solar increasingly competitive, and technology such as electric or hydrogen cars will allow us to cut back on our use of oil, there are some processes where so far, fossil fuels are indispensable.

Heating rock to make concrete is estimated to produce about five per cent of all the carbon dioxide humans release. So far we have no practical alternative, says Kenyon. Fertilizer production to feed the hungry is also a place where carbon capture and storage will be essential, he says.

As technology brings costs down, and carbon taxes push the cost of greenhouse gases up, the research by governments and fossil fuel companies on carbon capture and storage could begin to pay off. But it’s hard to imagine it will ever be cheap enough to allow us to keep producing the amounts of carbon we are generating today.