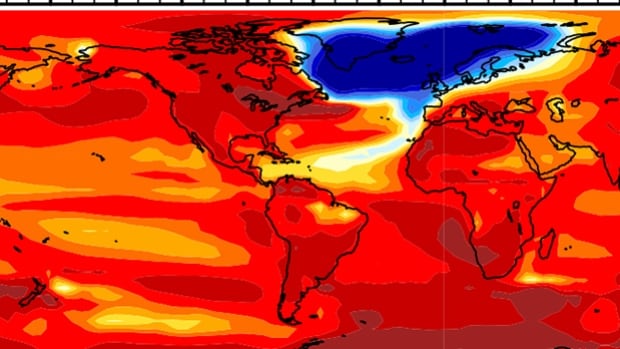 New research from scientists suggests that, as a result of climate change, Atlantic Ocean currents may not be as stable as current climate models suggest and could collapse in 300 years.

If you’ve seen the disaster movie The Day After Tomorrow, you may have heard of the Atlantic Ocean currents and their importance.

Warm water from the South Atlantic, as well as the Gulf of Mexico, travels northward to the North Atlantic, which in turn cools and then sinks. Then water moves back toward the south. This whole pattern — called the Atlantic Ocean Meridional Overturning Circulation (AMOC) — is largely responsible for the relatively moderate climate in the United Kingdom and other parts of Europe.

Computer models have found that a warming climate will most certainly affect the circulation, but not significantly, assuming that the AMOC is in a stable condition.

However, an international group of scientists believes the AMOC isn’t quite as stable as current climate models suggest, which lends bias to models trying to ascertain the effects of an increase of greenhouse gases. The behaviour of the AMOC would be influenced by a warming in the North Atlantic which would in turn influence its behaviour.

So the researchers ran models removing that bias. They found that, within 300 years of a doubling in carbon dioxide from the 1990 level, the AMOC collapsed entirely.

“If we correct the stability bias of the AMOC … and then add global warming forcing, the AMOC actually collapses after a couple of hundred years,” Wei Liu, a former Scripps Institute of Oceanography postdoctoral researcher now at Yale University and lead author of the paper told CBC News.

Should the AMOC collapse altogether, climate would be influenced across Europe and even in parts of Eastern Canada, including more severe winters and stronger storms.

But Liu said this is just one model. In the future, they’d like to apply more gradual warming to other models to see varying outcomes. What’s important about this study, Liu said, is about not underestimating the role of an unstable AMOC to climate model predictions.

Paul Myers, a professor at the University of Alberta’s Department of Earth and Atmospheric Sciences, said the study is important in highlighting the bias in current models. However, there may be other considerations to include in future models.

“I’m not disagreeing with the study in question in that atmospheric forcing biases may underestimate the sensitivity of the AMOC in future climates,” Myers told CBC News. “But … there are other biases too, and it’s the interplay of all of them … that will determine future sensitivity.”

Both scientists agree that this new research is important, as it illustrates how there can be a substantially different outcome in models if you remove the AMOC stability.

The study also acknowledged that further research would need to carefully examine how the ocean’s salinity might also influence models.

“The significance of our study is to point out a systematic bias in current climate models that hinders a correct climate projection,” said Liu, who hopes to continue studying various models.

The study was published in the journal Science Advances.