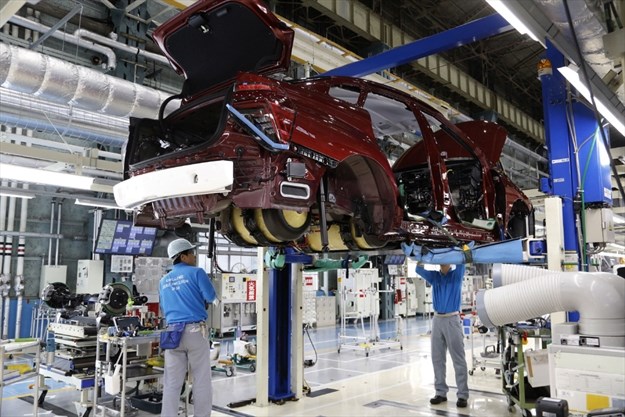 TOYOTA, Japan — At a car factory in this city named after Toyota, the usual robots with their swinging arms are missing. Instead, workers intently fit parts into place by hand with craftsmanship-like care.

The big moment on the assembly line comes when two bulbous yellow tanks of hydrogen are rolled over and delicately fitted into each car’s underside.

While much of the world is going gung-ho for electric vehicles to help get rid of auto emissions and end reliance on fossil fuels, Japan’s top automaker Toyota Motor Corp. is banking on hydrogen.

Toyota sells about 10 million vehicles a year around the world. It has sold only about 4,000 Mirai fuel cell vehicles since late 2014, roughly half of them outside Japan.

Hydrogen fuel cells don’t suffer the EVs’ main drawback of limited range. The Tesla Model S can go about 480 kilometres on a single charge, although that varies depending on driving conditions, and that’s quite a distance for an EV.

Other models run out of juice quicker, at about half that, because the longer the range, generally the heavier the batteries. And electric vehicles usually take hours to charge.

The Mirai can run for 502 kilometres per fuelling, under U.S. EPA conditions, and fuels as quickly as a regular car.

“In this light, hydrogen holds tremendous potential,” Uchiyamada, known as “the father of the Prius,” the world’s top-selling hybrid car, said during a tour of the factory.