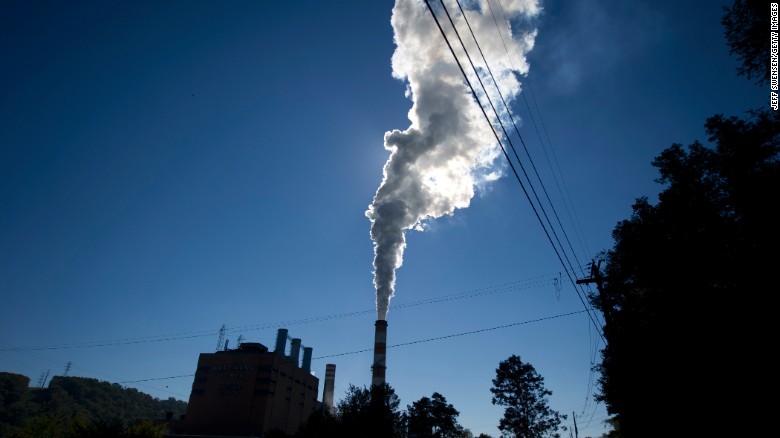 Washington (CNN)The Environmental Protection Agency is withdrawing a policy that requires facilities, such as power plants, that are “major” sources of hazardous air pollutants to remain classified as major sources even if they lowered their emissions.

Rolling back the policy, which was first implemented in 1995 under the Clean Air Act, follows several moves by the Trump administration to rescind environmental regulations. Environmentalists charge that the moves have often had the effect of benefiting the industries the agency is supposed to be regulating, as opposed to protecting health and the environment.
RELATED: 5 major changes to US environmental policy in 2017
The move allows major facilities to be reclassified as “area” sources after they reduce the air toxins they emit to levels below what defines a major source. A major source, according to the EPA’s standards, emits 10 tons or more of pollutants a year or 25 tons or more of a combination of pollutants.
The EPA argued that the “once in always in” policy has been a “longstanding disincentive” to pursue technology that would cut pollution.
close
“It will reduce regulatory burden for industries and the states, while continuing to ensure stringent and effective controls on hazardous air pollutants,” Bill Wehrum, the assistant administrator of the agency’s Office of Air and Radiation, said in a statement.
The agency said it also had no statutory authority under the Clean Air Act to enforce a time limit on when a facility can be reclassified as an area source.
John Coequyt, the global climate policy director for the environmental group Sierra Club, called it an “appalling attack” on public health and clear air.
“(President Donald) Trump and (EPA Administrator Scott) Pruitt are essentially creating a massive loophole that will result in huge amounts of toxic mercury, arsenic, and lead being poured into the air we breathe, meaning this change is a threat to anyone who breathes and a benefit only to dangerous corporate polluters,” Coequyt said in a statement.