Arctic temperatures surge in the dead of winter

Winter is still in full swing in the North Pole, but temperatures this week have been downright summerlike in the Arctic. 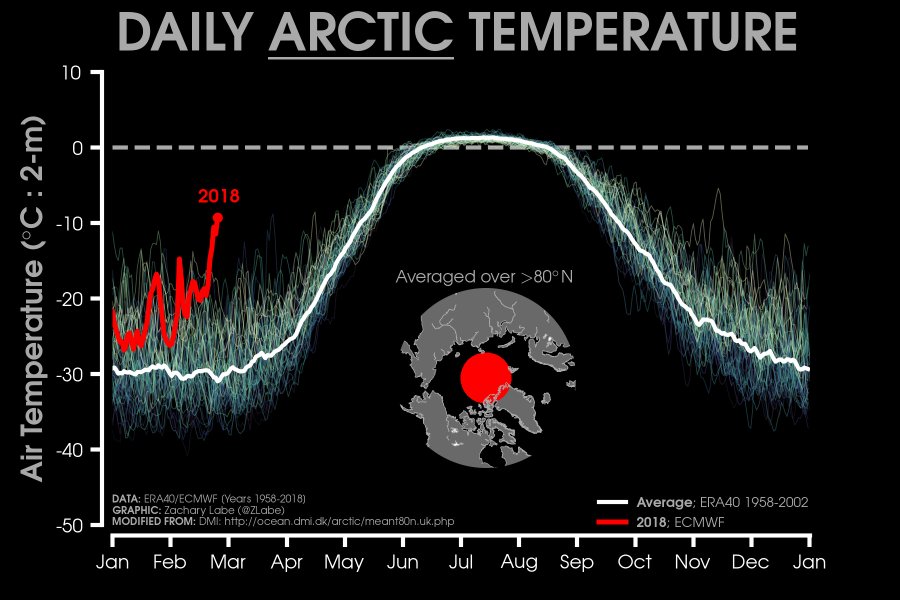 2018 is well exceeding previous years (thin lines) for the month of February. 2018 is the red line. Average temperature is in white (http://sites.uci.edu/zlabe/arctic-temperatures/ …)

Twitter Ads info and privacy
So what’s causing the Arctic’s “heat wave”?
It’s a combination of warm weather patterns coming into contact with retreating sea ice and rising and warmer sea levels, said Robert Graham, climate scientist at the Norwegian Polar Institute.
Although powerful storms have brought warm winds to the Arctic in the past, a fortress of sea ice would typically cool them down as they traveled north. But the Arctic’s shrinking sea ice has moved those barriers farther north, where southerly winds have been able to travel for longer stretches without being cooled. And as ocean levels and temperatures continue to rise, those warm southern winds are finding comfortable refuge across the Arctic Sea as they make their way toward the North Pole.
In the past, it was not unusual for the Arctic to see days where temperatures would peak above minus 10 C (14 F), but what we are seeing now is different. Those peaks are becoming more frequent and long-lasting.
More worryingly, the warming weather pattern is producing a circular affect.

The warmer the air and water, the less sea ice there is. And the less sea ice there is, the warmer the air and water can get (and stay warm). This, in turn, leads to less sea ice — and the vicious cycle continues.
For example, in Alaska, residents of the island village of Diomede are baffled at the open ocean water this February. There, residents are seeing the scientific findings in the Arctic play out in their own backyards. February should be the height of the sea ice season — but instead, crashing waves are changing their town’s coastline. The US National Oceanic and Atmospheric Administration’s head of Arctic research, Jeremy Mathis, told CNN that in many years of Arctic research, 2017 marked the first time that he and his group of researchers spotted no ice in the seas off Alaska.
“This year in 2017 during a 25-day cruise in the Arctic, we didn’t see a single piece of ice,” Mathis said. “We were sailing around on a Coast Guard icebreaker in blue water that could have been anywhere in the world. And it certainly didn’t look like the Arctic.”
Greenland’s melting glaciers may someday flood your city
Arctic sea-ice masses have been shrinking in size over the January and February months since 1980. Data from January and February 2018 has so far demonstrated the most dramatic losses in size, according to the National Snow and Ice Data Center. Last year had been the worst year for greatest loss in volume of sea ice until now.
Like the rising temperatures, sea-ice masses are also setting new records — but not the good kind.
“It seems like every winter we get a new record minimum at the moment,” Graham says.
He holds onto the hope that public concern over the Arctic’s rising temperatures will help shine a light on the issue he is most concerned about: shrinking sea ice.
“These simple events can seem quite shocking at the time but it’s what they do to bring attention to the large-scale sea ice that’s important.”
Photo essay: ‘Before its too late’

While the Arctic warms up, most of Europe has been hit with a cold snap that has extended into this week. The cold weather, dubbed “the beast from the East,” is the result of cold winds from Siberia sweeping across many parts of Europe.
Jason Box, an American scientist and professor of glaciology at the Geological Survey of Denmark and Greenland, said that cold air from the Arctic has been pushed away from its normal hovering position.
It’s now found itself invading more temperate locations like Rome, where locals woke up on Monday to find their city covered in snow for the first time in more than five years. 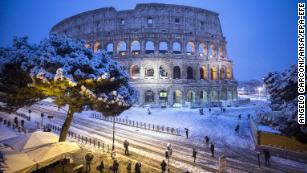 Snowball fights in Rome as Europe hit by ‘beast from east’ cold snap
“A new pattern that we think is part of climate change is where the normal so-called polar vortex that keeps the cold air bottled over the Arctic ocean, that cold air is spilling out… now that’s being displaced.”
“The pattern that we have seen over the last 10 years is that the Arctic Ocean has been warmer than normal, and Northern Eurasia is colder; we call it ‘cold continents warm Arctic.'”
Box’s theory remains a hot topic in scientific circles, with researchers from both Arctic and climate-change research institutes continuing to debate and research the physics behind the argument.
But one thing is clear: What happens in the Arctic doesn’t stay in the Arctic. It is Earth’s air conditioner, helping to regulate temperature and weather patterns in the middle latitudes. When that balance is compromised, only one thing is certain — strange weather.