The Great Barrier Reef is literally in hot water 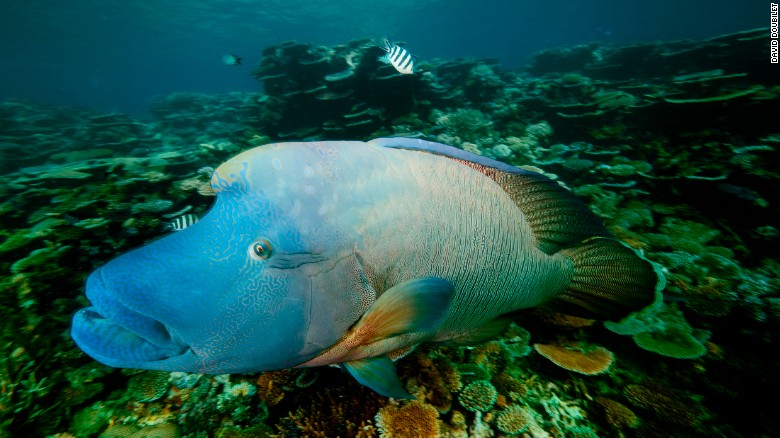 Photos: Great Barrier Reef
After corals die algae may take over covering the once vibrant reef. This coral died of an undetermined cause in Challenger Bay in 2009.
Hide Caption
3 of 8

David Doubilet began taking underwater photographs at the age of 12 and is a contributing photographer for National Geographic . He has won many awards and has produced several books, including “The Kingdom of Coral: Australia’s Great Barrier Reef.” He is a member of the Academy of Achievement, International Diving Hall of Fame, Honorary Fellow of the Royal Photographic Society and a Rolex Ambassador. The views expressed in this commentary are solely those of the author.

(CNN)Hold your pinky nail out in front of you. Now divide your nail into quarters. This is the size of one of the most remarkable animals in the world — the coral polyp. The life of this tiny creature represents a biological process that helps produce geological fact in the form of coral reefs. These minute organisms are the building blocks of The Great Barrier Reef, which at 1,400 miles long is the largest living structure on Earth — visible even from space. 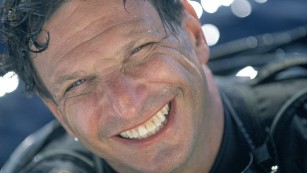 David Doubilet
Some of my most memorable moments in the sea have occurred in this remarkable ocean ecosystem. One mid-October night in the Australian spring our team, led by Dr. Peter Harrison, sank beneath the surface off Heron Island into a dark world that that resembled a galaxy of stars created by many different species of reef-building corals that release their eggs and sperm into a warm sea with precision timing in a single night. These bundles of eggs and sperm combine to eventually produce coral larvae. The morning sea is coated with oily pink coral spawn, and a tangy coralline odor, unlike any other smell in the world, hangs in the humid air, evidence of millions of years of evolution and one of the most intricate mass spawning events in the world.
Today, this living structure is facing an uncertain future in a warming sea. 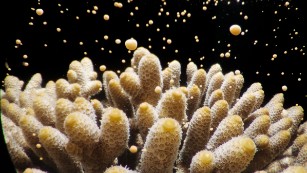 Acropora millepora release egg and sperm bundles that rise to the surface, creating a sea that resembles a starry night in the waters off Heron Island.
Sequential coral bleaching events in 2016 and 2017 have affected nearly 900 miles of the reef. Thermal stress causes the coral polyp to lose its symbiotic algae, which provides valuable nutrients and gives coral its color. If temperatures return to normal quickly, coral can recover with time. But these unprecedented back-to-back bleaching events give the already stressed coral little time to recover. The reef is literally in hot water, living under the Damoclean sword of ocean acidification and rising sea levels.
The Great Barrier Reef may be located in Queensland, Australia, but it really belongs to the world as the most well-known of all corals reefs on our planet. I am confident that even the most landlocked of Americans in the heartland know what it is and vaguely where it is.
When I was a kid, the Great Barrier Reef was the first reef on the radar of my imagination. I listened with intense curiosity as Captain Jacques Cousteau described in his films this remote reef on the other side of the planet. I dreamed of exploring its exotic world full of giant clams, octopus and sharks. 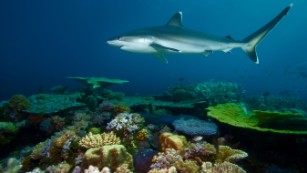 A silvertip shark patrols Great Detached Reef looking a meal.
Looking back now, I have spent nearly five decades underwater recording the rhythm of the sea on assignment for National Geographic magazine. I first descended onto the Great Barrier Reef in the early 1980s. Like many first-timers I was surprised to learn that the reef is an offshore boulevard of atolls and sinuous ribbons of coral that are ramparts bracing against the Coral Sea, a surprisingly lengthy boat ride away from any dock and seemingly always windy. I was seduced, and returned to Australia’s oceans dozens of times.
During one northern expedition in 2009 we journeyed to Great Detached Reef in the company of Dr. J.E.N. “Charlie” Veron, the former director of the Australian Institute of Marine Science. His book, “A Reef in Time,” is a primer on the Great Barrier Reef and climate change; it is considered the coral reefs’ “Silent Spring.” Veron guided us to the richest sites recorded in his pencil- and eraser-worn notebooks. We dove on robust reefs, every inch of space taken by up thriving hard corals fighting for space. 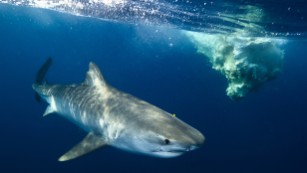 A tiger shark protectively circles a dead sperm whale on the inside of the barrier reef.
Once, we were focused on a coral subject when silvertip sharks appeared to investigate the fuss in their backyard, followed moments later by a very large hammerhead shark that circled us and left unimpressed. On our return we discovered a dead sperm whale inside the reef. Eight very rotund tiger sharks were taking turns feeding on the oily white carcass. We slid into the water and documented these magnificent predators on their terms. Encountering so many shark species in so few days was a welcome indicator of a healthy ecosystem.
On another overcast November day 1999 I chartered a twin-engine Aero-Commander in Cairns, Queensland, and flew north along the reef to make a set of aerial photographs. Four hundred miles, countless reefs and three hours later we flew over a raindrop-shaped sand cay perched on a platform reef that seemed to float on a blue sea. I looked out the window from 2,500 feet and saw thousands of clumps of algae surrounding the island. 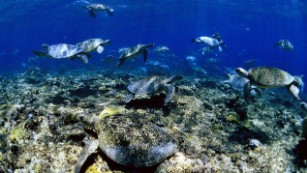 Green sea turtles moved like shifting underwater clouds as thousands of females waited for the cover of nightfall to leave the water and lay their eggs on Raine Island.
We circled and descended a few hundred feet and I realized I was not looking at algae at all. I was looking at tens of thousands of adult sea turtles, layers deep in the water surrounding the island. I was staring at the largest green sea turtle rookery in the world: Raine Island, a 1.8 km speck of sand that attracts up to 15,000 females a night to lay their eggs under the cover of darkness. This congregation of green sea turtles migrated here from North Australia, Papua New Guinea, and eastern Indonesia as their ancestors have for generations before them.
We flew back to Cairns and returned by boat to Raine Island with a team of scientists and park rangers. I entered the water to witness the most dramatic pulse of life I have ever seen in the sea. Thousands of sea turtles directly in front me were perfectly camouflaged, blending into the healthy reef scape and disappearing from a predators’ — and my — view.
Follow CNN Opinion

Looking at so many gathered in one place, one might wonder: How can these sea turtles be an endangered species? That was exactly the point. This was Earth’s mother lode of green sea turtles, all in one very small place and very vulnerable to human-induced or natural disaster. I did not know it then, as I watched and photographed clouds of turtles swimming past me on the reef, but they may well be the last generation to lay their eggs on Raine Island.
The die-off of the Great Barrier Reef isn’t just about losing coral. A slight rise in sea level, and the ocean will claim Raine Island as her own and the largest green sea turtle rookery on Earth will submerge and vanish, existing only as genetic GPS code in these wonderful ancient mariners.