North Atlantic right whales may be on edge of extinction. There’s been zero births this year

North Atlantic right whales may be on edge of extinction. There’s been zero births this year 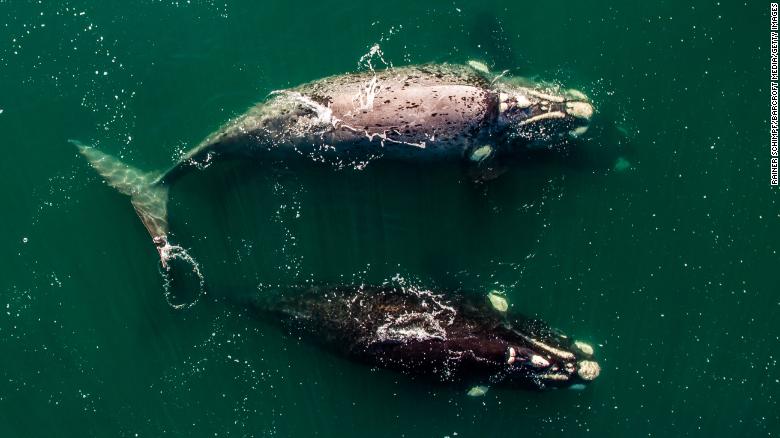 (CNN)The outlook for the North Atlantic right whale was already grim — they’re on the endangered species list, after all. But things could be turning downright catastrophic for the whales after a winter calving season where no calves appear to have been born.

The animal’s four-month winter birthing season ended this month, and researchers say they haven’t seen any newborns in the calving area off the coasts of Florida and Georgia. Normally mothers and calves would remain in the area through mid-April, Barb Zoodsma, who runs the National Marine Fisheries Service right whale recovery program, told CNN.
“I am hoping this is a blip,” she said. “But, I’ve seen blips before. What I’m seeing and hearing now has me worried.”
No new calves is truly bad news for the whales. There’s only about 450 of them remaining, according to the fisheries service.
And last year the number of dead right whales washing up on Atlantic beaches surged to 17, Clay George, a senior wildlife biologist with Georgia’s Department of Natural Resources, wrote last month in a department newsletter. The lack of births and rising number of deaths is a bad combination.
“That’s not sustainable,” George said.

Hope for a rebound fades

The right whale has had bad years for births before, only to make dramatic rebounds.
George writes in the winter of 2000, only one right whale calf was spotted. Then the next year, researchers saw 31 calves.
“I keep thinking, when are we going to have that amazing rebound?” George asks in his newsletter, but he’s not so sure that’s going to happen this time.
The reasons are numerous, Zoodsma and George both say:
Female right whales are also dying too young, Zoodsma says.
“Bowhead whales (closely related to right whales) are capable of living 200 years,” she said. “Most female North Atlantic right whales are dead by their 30s.”
North Atlantic right whales have been on the endangered species list since 1970, according to the National Marine Fisheries Service.
They were hunted almost to extinction by the end of the 19th century by commercial whalers.
Whaling isn’t a threat to them now, however, the top causes of death for the whales include getting entangled in fishing lines and being hit by ships.