Mental-health researchers are reporting an increased incidence of sadness related to losses around climate change.

NEWS 12:00 AM by Bob Weber The Canadian Press 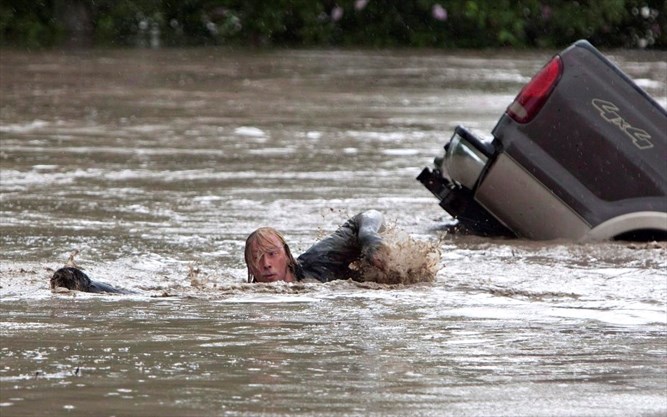 Kevan Yeats swims after his cat Momo to safety in High River, Alta., in June 2013. “There are still lingering effects from the flood,” said researcher Katie Hayes. “There’s anxiety when it rains, on the anniversary, as (people) cross the bridge to go into High River.” Mental health researchers around the world are beginning to take notice of what people feel when the world they’ve always known changes gradually or suddenly from the effects of a shifting climate. – Jordan Verlage , The Canadian Press

His canvases are painted from first-hand observation by a brush wielded in the outdoors and glow with the colours of the Canadian wilderness.

But British Columbia artist Dominik Modlinski doesn’t take his paints into the woods much anymore.

“I felt I can’t go on my painting trips because everything is covered in smoke,” he said. “I can’t go to some areas I love to go because you can’t see anything.

“I feel somebody is controlling my life and I can’t do anything about it. It does affect my mood.”

Mental-health researchers around the world are taking notice of what people feel when the world they’ve always known changes gradually or suddenly from climate change. Some call it environmental grief, some call it solastalgia — a word coined for a feeling of homesickness when home changes around you.

The American Psychological Association has released a lengthy report into solastalgia. So has the British medical journal The Lancet. Australian farmers report rising levels of depression as their drought-stricken lands blow away. An international group of climate scientists maintain a website entitled Is This How You Feel?

House of Commons committees have discussed it. Health Canada is exploring the topic.

“It is gaining more traction,” said researcher Katie Hayes from the University of Toronto.

In Canada, Memorial University professor Ashlee Cunsolo released a paper in 2013 on Inuit in the tiny Labrador community of Rigolet. People spoke of the sorrow they felt about being cut off from places they’d visited for generations because of vanishing sea ice.

Sometimes it happens slowly, sometimes all at once. Hayes has been looking into the effects of the 2013 flood in High River, Alta., the sort of catastrophic event that is expected to occur more and more.

“There are still lingering effects from the flood,” she said. “There’s anxiety when it rains, on the anniversary, as (people) cross the bridge to go into High River.”

Kids crawl into bed with mom and dad when the clouds open. People thinking about that box of Christmas decorations in the basement catch themselves when they realize it’s gone.

“People would talk about the smell of musty mouldiness or the sound of a generator coming on. It gets them welled up. It gets them nervous. It gets them recalling the flood, everything that they lost.”

A University of Alberta study found similar effects 18 months after the wildfire in Fort McMurray, Alta., that destroyed one-tenth of the city. A survey of visitors to health-care facilities found high levels of post-traumatic stress and anxiety disorders as well as substance abuse.

“We’re looking at broader psychosocial impacts, things like weakened social ties or increased addictions or even increased aggression in relation to domestic violence,” said Peter Berry, science adviser at Health Canada. “Some of the impacts can take place right away or take months or even years.”

Nor are disasters the only way weather related to climate change can cause stress.

“Volatility,” said Ron Bonnett of the Canadian Federation of Agriculture. “What we’re seeing is a lot more variation than we did in the past.”

Farmers can endure months without rain, then see their fields submerged in a cloudburst. More than just a business, farms are a home and a tradition, and that can raise the mental stakes, Bonnett said.

“There’s almost a mental block: ‘What do I do next? How do I make a decision?’ You’re just paralyzed. All you can see is that crop lying out there that you can’t get off.”

The words “paralyzed” and “powerless” come up often when solastalgia is discussed. Feeling there’s nothing you can do is doubly corrosive, said Julia Payson of the Canadian Mental Health Association in B.C.’s Okanagan region, where fires and evacuations have been a constant feature of recent summers.

“Powerlessness tells you you can’t fix this and you’re not going to stop feeling bad. It tells you there’s no point in reaching out, in gathering with community and seeing what you can do.”

In fact, she said, reaching out is one of the best ways of coping.

“Powerlessness breeds a feeling of isolation and when we can break that down by building community, it makes a huge difference.

“We acknowledge our feelings. We know it’s important to have them. We look for people to support us, we look for actions we can take to take back a feeling of control.”

People can feel like a “climate hostage” trapped by avalanches of information with little action from their leaders. Doherty suggests finding a way to get involved and do something.

He has another prescription: get outside.

“It is part of the coping. It gets you in touch with life, with things that are larger than you.”

But until things change, get used to solastalgia, said Modlinski.

“As an artist who paints the Canadian North, I have witnessed the slow, creeping climate change that is happening. The emotional environmental grief I feel will be a widespread anxiety. It’s going to happen.

“I don’t think our health system is even prepared to deal with it.”