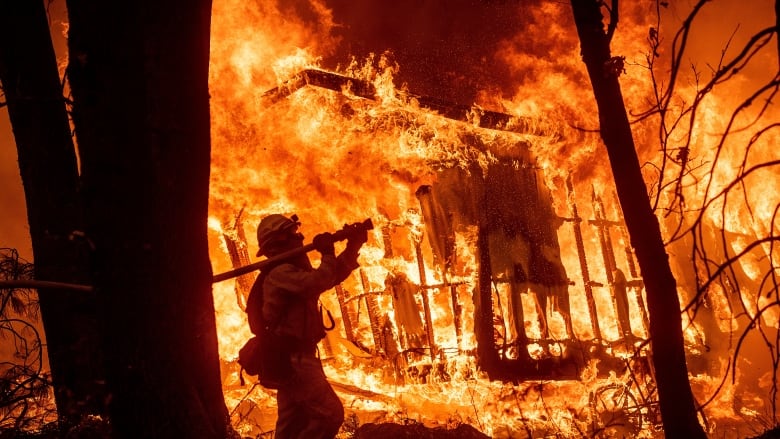 In this Nov. 9, 2018 file photo, a firefighter sprays water as flames from the Camp Fire consume a home in Magalia, Calif. (Noah Berger/Associated Press)

Pacific Gas & Energy could be the first company to file for bankruptcy due to climate change.

The utility provides services to northern California, and their equipment has been blamed for sparking the deadly Camp Fire that devastated the state in 2018.

The company announced their decision to file for Chapter 11 bankruptcy last Monday. Analysts estimate they could face up to $30 billion US in liabilities as a result of the blazes.

On Thursday, the state agency responsible for fire protection, Cal Fire, cleared PG&E for the deadly 2017 Tubbs fire in California, but the company’s culpability in in the 2018 Camp Fire has yet to be determined.

“They reported that one of their power lines was having a disruption 15 minutes before fire investigators say the Camp Fire started, so that doesn’t bode too well for them,” Brown said.

In a separate investigation, state officials found the company’s equipment was responsible for at least 17 of 21 major fires in the region in 2017.

While PG&E is among the earliest companies to blame climate change for its downfall, Brown says other businesses will not be immune to the future costs of extreme weather.

In fact, other major U.S. companies are already feeling that economic pressure. In a report from the Carbon Disclosure Project this week, Apple said that climate change has already affected their infrastructure systems, operations, and human resources, noting that some of its workers were forced to relocate when their homes were destroyed by Hurricane Harvey.

“I think you’re you’re going to start seeing Wall Street and corporations and institutional investors be more aggressive about how climate change could potentially impact their own companies,” Brown said. 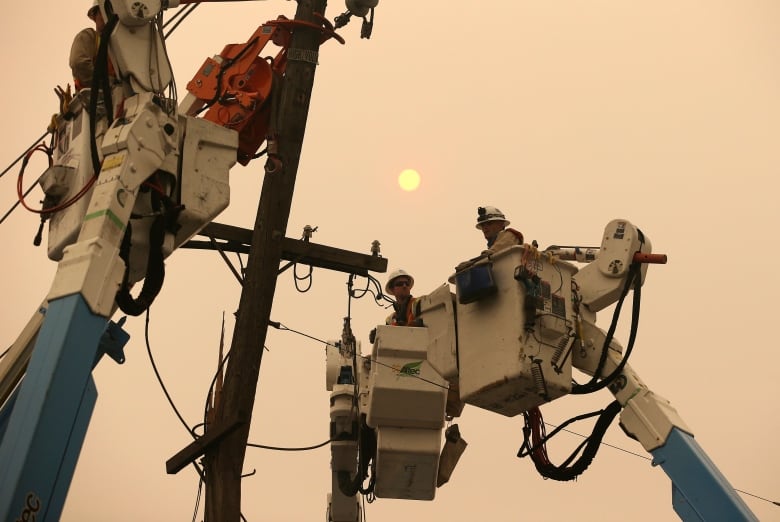 In this Nov. 9, 2018 file photo, Pacific Gas & Electric crews work to restore power lines in Paradise, Calif., site of one of the worst wildfires the state has seen. (Rich Pedroncelli/Associated Press)

If the bankruptcy goes through, PG&E has said the lights will stay on for their customers, but there’s no guarantee that rates will stay the same.

Legal fees and other associated costs could be passed onto Californians — meaning higher bills.

“It’s kind of unfortunate because no matter the way the scale tips, the burden is on the rate payer … the victims of the fire,” Brown said.

As climate change leads to more powerful natural disasters and extreme weather, PG&E says that bankruptcy is “the only viable option.”

But the move to bankruptcy has been criticized by those who say the company is using climate change as a cover for its own negligence. In 2016, the company was convicted of six felonies after the explosion of a natural gas pipeline it owned killed eight people in 2010.

“They’re [the critics] trying to say that their equipment could actually be negligent, right? It’s not just climate change.”

But even if they’re not found at fault, a state law known as inverse condemnation, unique to California and Alabama, could leave them liable, Brown says.

“The law allows a company like PG&E to be held liable even if they weren’t negligent, even if they adhered to all of the state’s rules, they could face some hefty fines for their role in the fires,” she added.