Chicago is sinking. Here’s what that means for Lake Michigan and the Midwest 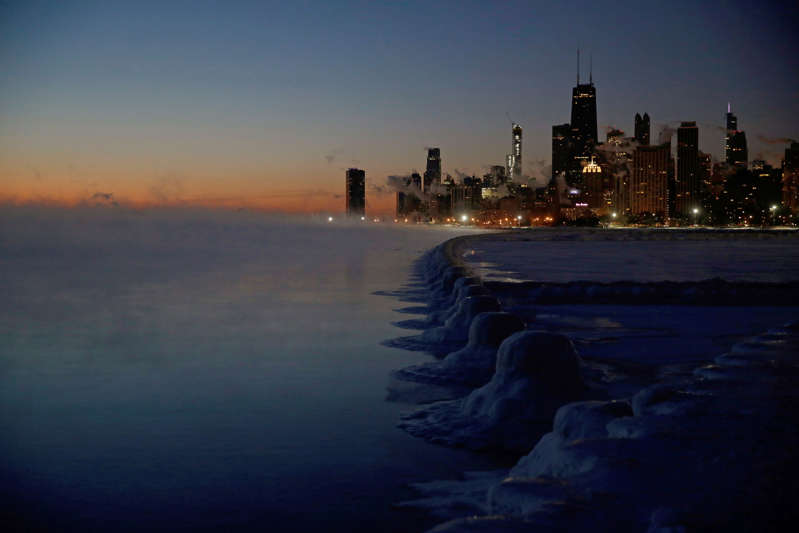 © ASSOCIATED PRESS Ice forms along the shore of Lake Michigan before sunrise, Thursday, Jan. 31, 2019, in Chicago. The painfully cold weather system that put much of the Midwest into a historic deep freeze was expected to ease Thursday, though temperatures still tumbled to record lows in some places. (AP Photo/Kiichiro Sato)CHICAGO – The sightlines at Wrigley Field, the panorama from Navy Pier, the vantage points at the Adler Planetarium observatory – all structures built more than 100 years ago – are at least 4 inches lower now.

In the northern United States and Canada, areas that once were depressed under the tremendous weight of a massive ice sheet are springing back up while others are sinking. The Chicago area and parts of southern Lake Michigan, where glaciers disappeared 10,000 years ago, are sinking about 4 to 8 inches each century.

One or 2 millimeters a year might not seem like a lot, but “over a decade that’s a centimeter. Over 50 years, now, you’re talking several inches,” said Daniel Roman, chief geodesist with the National Oceanic and Atmospheric Administration. “It’s a slow process, but it’s a persistent one.”

While Chicago’s dipping is gradual, this dynamic could eventually redefine flood plains and work against household sewer pipes that slope downward to the sewer main.

The greatest impact of this imperceptible phenomenon likely won’t be inland, however. The contour separating the part of the continent that is rising from that which is falling bisects the Great Lakes.

In Lake Michigan, that line passes from Death’s Door at Green Bay in Wisconsin to Grand Traverse Bay in Michigan, signaling that the far northern end is rising while the rest of the lake is lowering. Over time, that has created a tilting effect, generally translating into higher lake levels for the southern end of the lakes and lower watermarks for the northern shorelines.

Assuming Lake Michigan’s overall water level stays the same, Chicago’s lakefront will be about 4 inches higher in the next century. The slow-motion, seesaw effect is also happening in other cities on the southern end of the lakes: Cleveland could see a 4-inch swell in Lake Erie’s levels and Milwaukee is projected to see a rise of 5 1/2 more inches. Places such as Canada’s Hudson Bay, which was covered by glaciers up to 9,800 feet thick, are rising up to 3 feet per century.

While Earth’s surface may appear to be rigid, it actually reacts similarly to a tube of toothpaste that’s pressed in the middle. When pressure is applied to the planet’s lining, known as the crust, that energy is transferred to the gelatinous layer of smoldering rocks called the mantle. The mantle, which behaves like a liquid, caves under the weight and moves to neighboring areas that bulge.

When the hefty ice sheet melted and the pressure was lifted, the mantle began to flow back to areas where it had thinned out.

Chicago, on the fringe of the last glacial intrusion, rebounded for a time after the glaciers disappeared. But now the city is slowly submerging because more of the mantle is returning to Canada, where the thickest part of the ice sheet bore down on the landscape.

“We can still see the land moving now even though the ice came off Chicago 10,000 years ago,” said Seth Stein, professor of geological sciences at Northwestern University.

This shift will also affect the movement of water between the lakes. In Lake Superior, the eastern end that lets out into lakes Michigan and Huron is rising, while the far western edge is slumping. Researchers suggest that could slow Superior’s outflow while causing lake levels to surge 10 inches per century near Duluth, Minn.

“If you’re tilting one direction, the water flows might change direction or water might accumulate in a way different than you expected in the past,” NOAA’s Roman said. “That’s important for on-land and near-shore environments. You might get more water, but not where you want it.”

How that will magnify changing water levels is hard to say. In the past six years, Lake Michigan’s water levels have fluctuated wildly, hitting a record low before rising 3 feet to well above the historic average.

Ron Watson, a 73-year-old Naperville retiree, has seen the dramatic swings over the years from his two-story home across the street from Lake Michigan in New Buffalo, Mich. He saw the record-high lake level in 1986, but he has been even more disturbed by the recent unprecedented rise seen between 2013 and 2014, during which houses have been condemned and beaches have been swallowed up.

Neighbors have been concerned that increased precipitation from climate change is one driver. Lakefront development also has exacerbated beach erosion.

And the subtle sinking from the last ice age is contributing to all of these, Watson said.

“That’s only going to aggravate the situation,” Watson said. “The reason I say I’d be concerned is because if you’ve ever lived on the shoreline, it’s inches of water we’re worried about, not feet of water. When lake levels are high, all it takes is inches.”