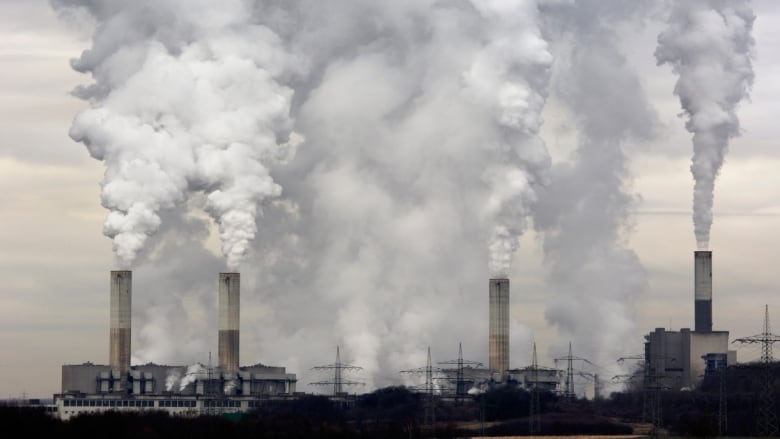 Carbon dioxide emissions like this can be taken out of the air and turned back into a solid carbon state, like coal (RMIT University)

Researchers in Australia have developed a method that can convert carbon dioxide emissions from fossil fuels back into something not very different from coal.

Researcher Torben Daeneke told CBC Radio’s Quirks & Quarks that his process could amount to “rewinding the emissions clock,” by returning greenhouse gases to a form that can be permanently stored without risking re-release into the atmosphere.

Carbon capture and storage has been proposed as a potential solution to the problem of large scale emissions from fossil fuel power plants. Scrubbers can capture carbon dioxide from smokestacks, and the gas can be liquefied and pumped into sealed reservoirs underground. The technology has been tested in various places around the world, including in a decommissioned oil field in Weyburn, Sask.

While there are concerns that CO2 stored underground could escape back into the atmosphere. Daeneke, a senior lecturer in the School of Engineering at the Royal Melbourne Institute of Technology in Australia, and his team, were interested in developing a technology that would remove that risk.

“Earthquakes that are seen around the world now are associated with fracking and things like that. When we start to pump things and fluids underground under high pressure all sorts of things can start to happen and we are just starting to realize that this might be a problem.”

The technology Daeneke and his group have developed converts CO2 from gas back into its original solid carbon state. The end product is something like coal. 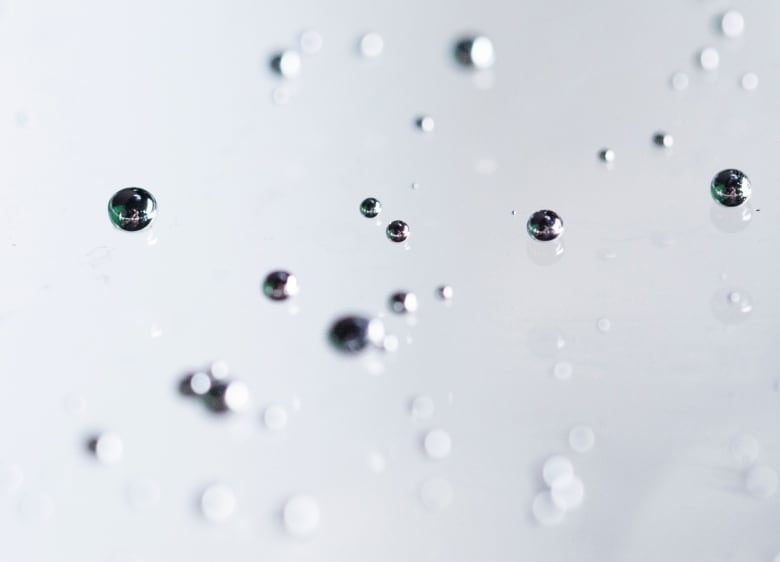 Liquid metals, not unlike mercury, are used a catalyst to convert carbon dioxide gas back into a solid state (Peter Clarke, RMIT)

The key to their new technology was a material that could help them efficiently crack carbon dioxide into carbon and oxygen. The researchers developed an electrochemical technique that involves using a liquid alloy of gallium as a catalyst.

In their experiment, carbon dioxide was dissolved in an electrolyte liquid with a small amount of the gallium alloy. The contents were then charged with an electric current.

The electric current energized a chemical reaction that split the carbon dioxide into solid carbon and oxygen gas.

“You run the electricity for maybe an hour or two, then you start to see more and more these little black and brown flakes floating inside of the liquid,” said Daeneke. “It is mostly made out of carbon with a little bit of oxygen and hydrogen bound in it. So it is essentially like turning CO2 back into a brown coal.” 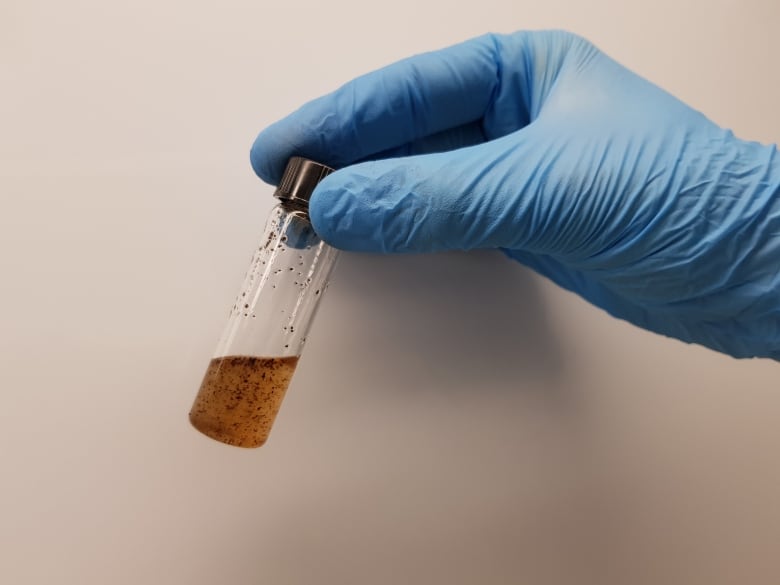 CO2 slowly converts into solid flakes of carbon as they detach from the liquid metal surface in this vial. (Torben Daeneke)

Daeneke says that his process is superior to previously explored methods for converting CO2 into a solid state because of its efficiency. Older technologies required high temperatures and a great deal of energy. The new reaction can happen at room temperature, though it still requires electricity to drive it.

The reaction takes about as much energy to restore the carbon to solid form as was released when it was burned in the first place.

He imagines, though, that as the cost of renewable energy continues to drop, this may prove an effective way to deal with captured carbon dioxide because the solid carbon is so easy to transport and store.

It could be stored in the ground safely, without risk to the environment — perhaps buried in the coal mines it came from. But this relatively pure form of carbon could also be a valuable industrial product with many potential uses.

“We can actually use this material to create things that are called supercapacitors. Supercapacitors are often based on carbon materials that are used to store electricity,” said Daneke. “You might actually use some potentially in electric cars, batteries, a variety of applications.”

The next step for the researchers is to scale up this work beyond their laboratory. “We’re working with a small beaker in our lab with a small amount of carbon being generated but we don’t see any problem with why this can’t be rolled out on a very large scale.